Menu
Log in
Register
Install the app
You are using an out of date browser. It may not display this or other websites correctly.
You should upgrade or use an alternative browser.

How to make money with Pi Network?

1. Pi Network is a virtual currency that can only be mined or mined on a phone, but does not consume device resources like other free mining applications. Previously Pi Network could include mining applications such as Electroneum (ETN), but this application consumes your device resources to decode the algorithm (Electroneum uses cryptonight algorithm). With Pi Network, when you dig coins will feel the device does not heat up. In addition, you can also turn off the application or turn off the network and still be able to mine coins every 24 hours.​ 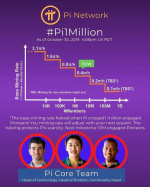 Pi Network is still in BETA. The project is still in progress which means that there will still be errors and some details of the project are still changing. While many cryptocurrency projects start from pure theory, Pi Network seeks to balance theory with design and people-centered (or experiment with real people to best meet their needs). ). The project appreciates your patience and welcomes your input as we work together to develop products that best meet community needs. Pi does NOT give you free money. This is a long-term project whose success depends on the common contribution of its members. Pi helps people capture economic value, which is held by banks, technology giants (e.g. Facebook, Amazon) and other intermediaries. Pi depends on the contribution of the members. Therefore Pi NetWork is not suitable for those who want to make money quickly. 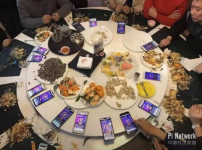 Pi is not a hoax. This is an attempt by a group of Stanford University alumni to spread the cryptocurrency to more people. Pi Network’s core team is led by two Stanford PhDs and one Stanford MBA, all of which help build the blockchain community at Stanford. There is no guarantee that the project will succeed. However, Pi Network will work hard to make common dreams a reality, while upholding the highest standards of transparency. You can learn more about Pi’s core team on the app, or simply by typing these people ‘s names into the Google search page: 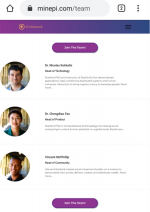 3. How to make money with Pi Network?​

How to exploit Pi

Pi Network does not call you to invest or do anything. Your job is very simple, you just need to have a phone, download the Pi Network app and create an account, press the Start button daily and the PI digging will take place even if your computer is not connected to the internet . You also do not need to open the active application. Pi does not affect your phone performance, does not drain your battery or use your network data. To start earning Pi, check the app every 24 hours and press the lightning button to start mining. You can increase your hourly Pi rate by inviting friends and family to join the community. After 3 days of exploitation, you can increase your income even more by building your security circle, which contributes to the overall security of the network. And remember, veterans of the network have a higher rate of extraction than the members who come after them.

Why are veteran members exploiting more?

Pi’s goal is to become a widely distributed and widely used electronic currency in the world. To achieve that goal, Pi encourages members to contribute early to ensure the success of the project (eg network protection and development). To reflect the importance of early contributions, the rate of extraction decreases as more people join the network. At this point, the base mining rate will be halved every time the number of active users increases by 10 times. This ratio will be reduced to zero when the network reaches a certain number of users (for example, 10 million or 100 million). At the time, like Bitcoin, miners would continue to receive rewards with transaction fees, rather than being rewarded with new coins.
What is the Pi Network security circle?

The security circle is a group of 3–5 trusted people built by each Pi member, to prevent fraudulent transactions. While cryptocurrencies like Bitcoin secure their ledgers by forcing mining companies to burn energy (proof of work), Pi still guarantees its ledger when members of the network prove trust with each other. Pi contributors guarantee each other by building up security groups of 3–5 members whom they deem reliable. The security circle should include people you trust not to make fraudulent transactions. The cyber security circles form a global trust chart to determine who can trust to conduct transactions on the Pi ledger.
​

Pi is worth approximately 0 dollars / euro. Yes! If the price is $ 0, then we dig PI do? Also you wonder when PIs will be valuable? While everyone thinks that PIs are not valuable and do not participate, just like when BITCOIN 2008 had no value. If you are a PI holder PI holders have two options to convert PIs into cash:

- Exchange Pi for cash on cryptocurrency exchanges. Pi will be able to be traded during Phase 3 of the project (such as when launching the Mainnet). At that time, exchanges may choose to list Pi. At this point, Pi’s core team focuses on implementing the right technical roadmap to reach phase 3.

(I still remember in 2015, in MMO communities, competing to receive free coins called Raiblocks (XRB) by typing captcha, each type of such a lot of XRB, it can be said that the day that XRB has no price value, almost 0. Later in early 2018 when Raiblocks changed its name to NANO project, the peak of 1 NANO coin reached 34 USD, sweeping away the dream of millionaires of MMO people, because at XRB, they sell very cheaply for each other. You can refer to the NANO price chart below)
​

Pi Network currently supports both Android and iOS operating systems, you can access the Google Play app for Android or App Store for iOS and search by keyword “Pi Network” or click directly at the following link:​

Then enter the First Name and Last Name.

Finally, the Username (this is the name for me to log into the Pi Network application, don’t forget this). After filling all information, click Submit to move to the final step. In this last step, you enter the referral code is kennguyenandroid (this is my code). However, you can enter anyone’s referral code. But when entering my code, I am very thankful and if there is any problem that needs support I will be very enthusiastic.

So you have completed the Pi Network registration, now you just leave it to receive coins daily, or go referrals to others to earn more Pi.

The amount of Pi you mine per hour is shown in the Ambassador section. If your lower members mine Pi, you will receive (25% x 0.39pi x the number of people). However, if they are not online for more than 1 day, you will not receive Pi from them, so you press Ping Inactive to push them to notify the application access.

Add people to the security circle

After 3 days of digging Pi, you will open a security circle, what it is, please read the above article, here you can add acquaintances to dig more Pi together.

You need to verify your account so that stage 4 of the project can be withdrawn. To verify Pi Network, access Profile and select Verify as shown: 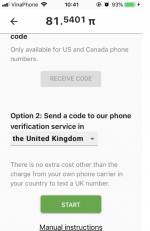 There are two options for verifying your account: getting a verification code (only applicable to the US and Canada) or sending a message to Pi Network. You will have to use option 2 and press Start.

Then click Open SMS to let Pi Network compose a message to send a 4-digit code.
Note that Pi will generate 4-digit code itself, you do not edit anything and just click Submit.
If the Pi application verifies that you have successfully verified your account.
​

You cannot withdraw the Pi. You will be able to withdraw Pi or exchange Pi for other currencies during Phase 3 of the project, when Pi switches to a completely decentralized blockchain.
Phase 1 of Project Pi is on March 14, 2019 (Pi Day). In Stage 1, your balance is being recorded to wait for the day Pi reaches the mainnet (Phase 3). The transfer or withdrawal of Pi is restricted until the mainnet launch, to prevent fraudulent actions, such as clone users to dig Pi, then transfer Pi to another account and legalize the process. verify your account and use that nefarious Pi number.
​

8. Should you dig Pi on multiple phones?​

No, you SHOULD NOT dig PI on many devices. Pi Network adheres to a strict rule, meaning that only one account can be used per person. Pi Network uses a multi-pronged strategy to ensure that fake accounts cannot exploit Pi

First, the Pi network uses Google Recaptcha v3 to know which devices are operated by humans or robots. (This technology is completely invisible to most users, because they are real people, but robots can see the captcha if the google algorithm captures them.) Over time, Pi Network is developing a machine learning algorithm based on actual user exploitation behavior to predict bots.

Finally, when Pi enters Stage 3 and 4 — Mainnet, only authenticated accounts can exist. Buy
​

Currently, there is only 1 exchange, AACoin listed PI (AAcoin - CryptoCurrency Exchange) in the form of short purchase and sale, meaning that they buy and sell PI but do not actually own any PI. Because PIs have not been withdrawn until entering phase 3 (mainnet), all PI trading platforms are fraudulent. The Pi Core team also issued a warning. In addition, users should not buy and sell Pi transactions on the black market through the sale of accounts, because all of us have not been able to price Pi, so there are many potential risks.
​
Last edited by a moderator: Feb 23, 2021
Sort by date Sort by votes
M

Users are putting value into the app. There are hundreds of posts online saying PI Network can not be a scam because users do not put any money it. Users' time and data are valuable to those users and they are spending these on the app.
Upvote 0 Downvote
You must log in or register to reply here.

Crypto Vakuum strategy going to reveal to you the results I have with ZERO's effort.